My experience of the 6th annual Umbraco UK Festival in London

For the past 6 years the fantastic guys at The Cogworks have been organising the UK Umbraco Festival - and each year it gets bigger and better.

I was lucky enough to get to travel down (with my colleague and good friend @milquetoastable) and experience the awesome sense of community the festival engenders. You really wouldn't think a mere CMS could generate such devotion - but Umbraco isn't just a content-management system; at it's heart is the community and it is the community that make it special. So it was fitting, perhaps, that this year's festival took place in The Crypt on the Green - a working Church. Nobody could fail to miss the analogy of the faithful gathering to worship. And the faithful weren't disappointed, as a full contingent of the Umbraco core team made the trip over to the UK to take part. 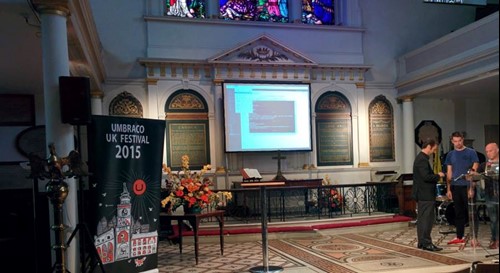 As is usual Neils (the 'father' of Umbraco) took the keynote along with Per Ploug and wowed everyone with demonstrations of Umbraco as a Service and the new features in the forthcoming 7.4.0 release (currently still in development). The (perhaps unfortunately acronymed) UAAS has certainly come a long way since I saw sneak preview of it in beta over a year ago. It could be a real game-changer for Umbraco and certainly seems to have a lot of offer teams wanting a slicker deployment process. I also experienced a small blush of pride when Seb tweeted that very day that my Diplo Trace Log Viewer had become the first package to be certified as UASS compatible.

Alongside this the improvements coming in 7.4.0+ also look fantastic - top of every developer's wish-list will be the new and very slick Content Type Editor that vastly improves the process of creating document types and their associated property editors. However, smaller UX improvements, like improved filtering in the Media Library or the ability to categorise doc types into folders will also be very welcome. Along side this, announcements that Umbraco now sports a full HAL-compatible REST layer for content were almost casually dropped in. Safe to say that 7.4 looks to be one of the biggest releases to date.

But the festival isn't just about Umbraco. A wide range of speakers talked about a variety of topics that spanned everything from user-experience testing to esoteric graph databases. Whilst there wasn't anything as potentially life-changing as Doug Robar's inspiring speech last year, there was still plenty to learn and love. It wouldn't be fair to single out individual speakers, especially as there were more events on than any one person could attend. However, it's safe to say that many people were enthralled by Microsoft evangelist Martin Beeby's talk about the future of ASP.NET (vNext or 5). I've blogged before about the "new openness at Microsoft" but to actually hear the enthusiasm for open-source and open-standards coming directly from a Microsoft employee really brought it home just how much Microsoft have shifted culturally. It's pretty clear that the future of ASP.NET has never looked more exciting. 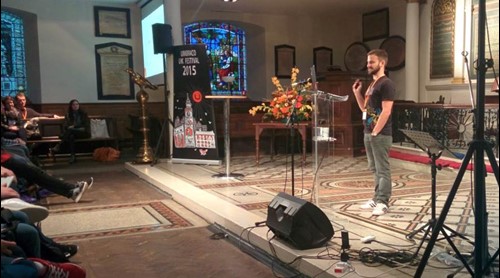 After a day of inspiring talks it was a hard task for core developer Shannon Deminick to take the stage and finish off proceedings. Whilst I've followed "Shazwazza's" coding activities for a while (and knew he was a very talented developer) I'd never heard him speak before. Public speaking to large audiences isn't something that comes naturally to many developers, but Shannon really blew away everyone in the room with his enthusiasm for his talk in which he outlined the roadmap for Umbraco 8 and beyond. From my scribbled notes the main parts I remember are:

This is basically the ability for Umbraco to have "virtual nodes" that are linked to a master node to enable variations of that content. Think a better way of doing multi-lingual sites when you want a 1-to-1 translation of languages, for instance.

This allows content to be targeted at different end users based on a wide-variety configurable parameters. Think personalisation of content for members based on, for instance, their interests.

Championed by Stephan, this is a new swappable caching layer for Umbraco that can replace the current XML cache. The main thing to take away is that this should increase performance of querying cached content considerably. You can read more about this on Stephan's blog.

This should be the final purge of legacy code and should see final good-riddance to those horribly named assemblies (like umbraco.businesslogic) from the core. Basically expect a neater, leaner and more testable Umbraco devoid of legacy baggage.

This is a continuation of the process where unique IDs are being moved from being integer-based to GUIDs. The big advantage of GUIDs is that they should remain unique when content is synchronised, enabling Umbraco Deploy (formerly Courier) to perform it's magic far more reliably.

This should please a lot of developers who have ever faced versioning conflicts. It basically involved updating Umbraco's 3rd party libraries to the latest versions - both front-end (jQuery, AngularJS etc) to back-end (Automapper, JSON.NET and, of course, Log4Net).

This is a progression of Shannon's Examine (an indexing layer on top of Lucene.NET) taking it to the next level. Better faster indexing and the ability to include Grid content were just some features I remember.

You can watch Shannon's presentation online now - The Road to V8... and Beyond. And you can find the Umbraco Roadmap on Our Umbraco.

The Future is... Orange 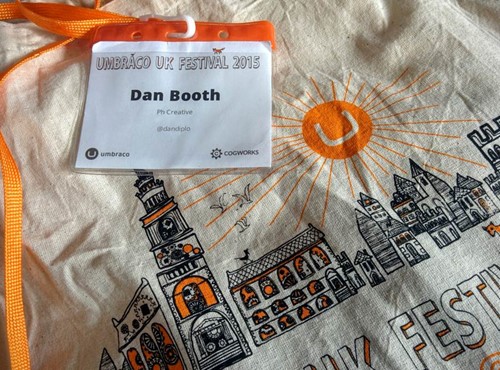 Thanks for sharing! Was sad to not be able to make it this year, but you're definitely right about the community atmosphere, and it looks like there's a lot to look forward to in the near future!

Thanks for the comprehensive write up. This is the first UK Festival I've been unable to attend so was a bit gutted but thanks to posts like this I can still try and keep up with all the news!

Thanks for the great festival synopsis Dan! I have to agree with you that the future of Umbraco is definitely bright, there are so many things I can't wait to have a go at! :-D

By some of your pictures it seems we were actually sitting in the same area for each talk, wish we'd had the chance to meet up finally, maybe next year?!? ;-)

The future looks very bright for the best CMS around :)

About the variants part. Since it won't come out until v8 you could now try it with Vorto and a UrlProvider and ContentFinder. You can find an example here: https://our.umbraco.org/projects/developer-tools/1-1-multilingual-example/

You can experiment with NuCache ("Le Cache Nouveau") already. The source code is available here: https://github.com/umbraco/Umbraco-CMS/tree/dev-v7-contentcache

In this video I explain how I've upgraded a project to NuCache: https://youtu.be/DWjbJiIUQdk

Just fill in the form and click Submit. But note all comments are moderated, so spare the viagra spam!

Tip: You can use Markdown syntax within comments.